Good save. Pays to have a feel for your car.

-  Tue Dec 21, 2021 10:41 am #12247
I’m on Christmas vacation. I put a day into the shed/ mini shop (10 × 12 A frame). The metal roof is on and I started putting up the OSB. I got one side done after spending a few hours reframing the windows higher. It will be nice to have a dry spot to work right by the house. All though it is not a garage the car does fit through the French doors I’m putting in. It was the cheapest way to get larger equipment through. I wanted the overhead A frame attic space for lumber and other storage therefore a garage door was out, and rollups were way to expensive after shipping. It will serve in the long run for yard tools and equipment, and work station mixed use. Next spring I will run 100 amps to it. Extension cord will get me by until then.

I never got a chance to install the rear brake system. That is on the list today. I think I have a good chance at it.

I tried getting a set of winter wheels. Every f##king wheel that I liked at that would fit was backed ordered until February or March. I settled for a set of new front all season tires for the white gt. I’ll pickup the winter wheel hunt in March when the winter is over for me. Hopefully prices will come down to.

As the weather around here as dipped into thirties (which isn’t cold) I have tried limiting amount of time on R compound Yokohama tires. Waiting for the weather to warm at mid day. When I’m not at work I tend to not drive anywhere.

I want to finish up the brakes and carpet projects and then focus back in for a while on my own artwork. I spent a day in my studio trying to finish up a couple drawings. I really should spend most of my free time in there but the car projects have taken most of my focus. It is an addiction, but a relatively safe one.
Walt liked this

So GT4…. drawings in a studio… that mean you are an artist…. graphic, oils, water, etc? Very cool

Yep an oil painter but I do use every medium including 3 dimensional materials (clay, etc.) 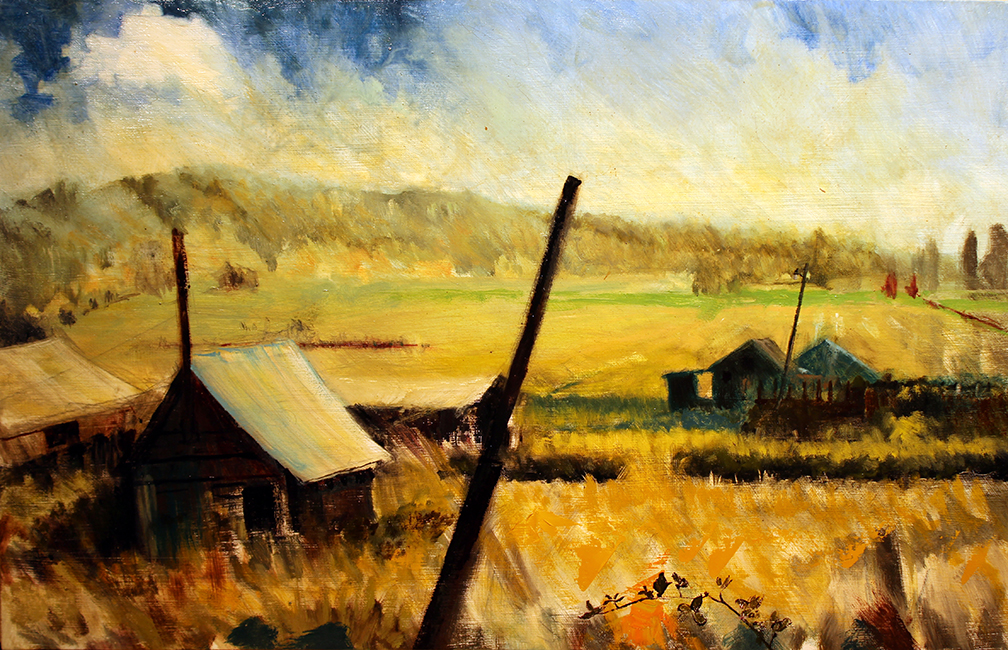 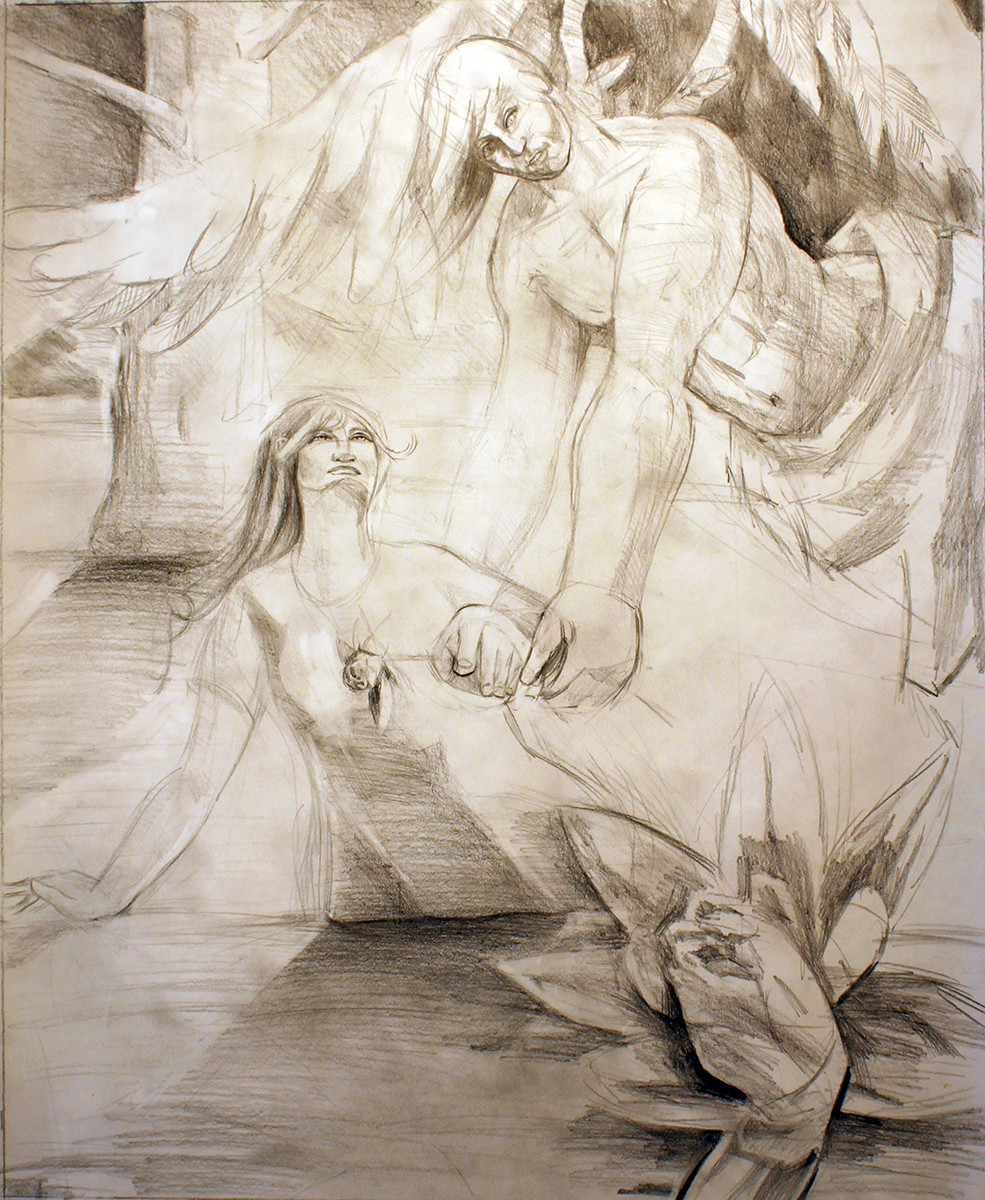 -  Sun Jan 02, 2022 6:08 pm #12298
Finally rear Wilwood system is going in. I’m ½ way done, and need the car for work tomorrow. Freaking Lokar boxed the wrong parts for the brake cable. Everything looked right, but the actual fittings were all wrong. Even the pins were wrong. It cost me five extra hours on the install. Pretty sure they boxed a universal instead of the one for the MC-4 caliper. I had to modify the parts to fit including drilling out and lathing parts.

-  Wed Jan 05, 2022 1:28 am #12305
I have successfully got the main Wilwood rear brakes on with one MC-4 emergency brake caliper on the right rear. I called SummitRacing to see if I could at least get the right parts for the other side so I don’t have shave .050″ off the fitting that goes into the caliper bracket and make sure the other end is doing what it is supposed to. They’re going out of their way to contact Lokar to hopefully get me the parts. I had some bleed problems with some fitting, but I got that squared away tonight. I went on a quick test drive with some very wet lock ups. It feels pretty solid four wheel lock up.
Walt liked this

-  Sun Jan 09, 2022 12:11 pm #12360
I made a mistake running the Emergency brakes up instead of down. Meaning the emergency bracket can be flipped to point down or up. I didn’t see the clearance issue when I was test fitting, and down I would lose the rear brake bracket. Turns out that I cannot use the bracket anyways since I have to run the brake line on the other side of the strut. I was also thinking the emergency brake line would install better in the other position which is true, but is far better choice to run the bracket down. Hein sight is 20 20. That forced be to cut into the rear inner tub about 4″ up to allow for travel clearance. I believe if I would have installed reverse I would not have had to do that. At some point I will go back in and run weld bead at the bottom edge of the cut to strength it. Emergency lines are already cut to length. I might be possible to re-mount the inside to get it to work, but the cut is already made. 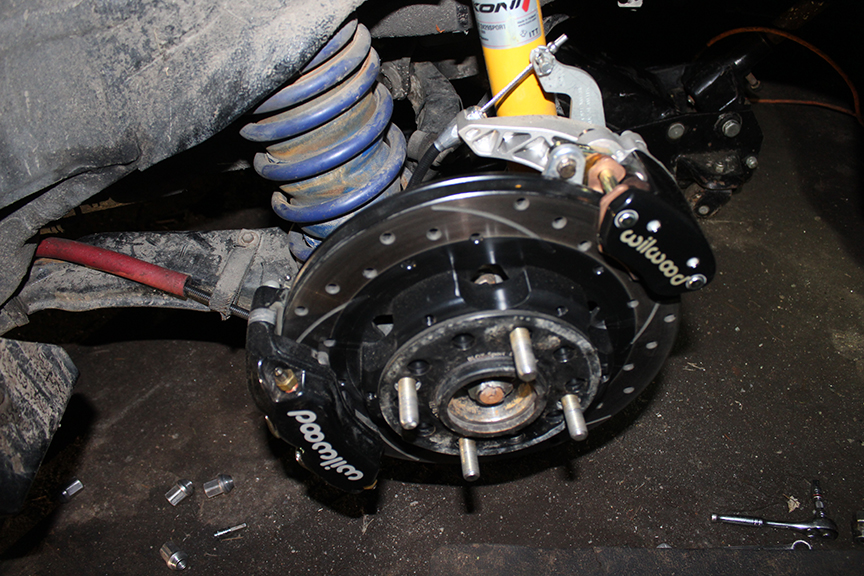 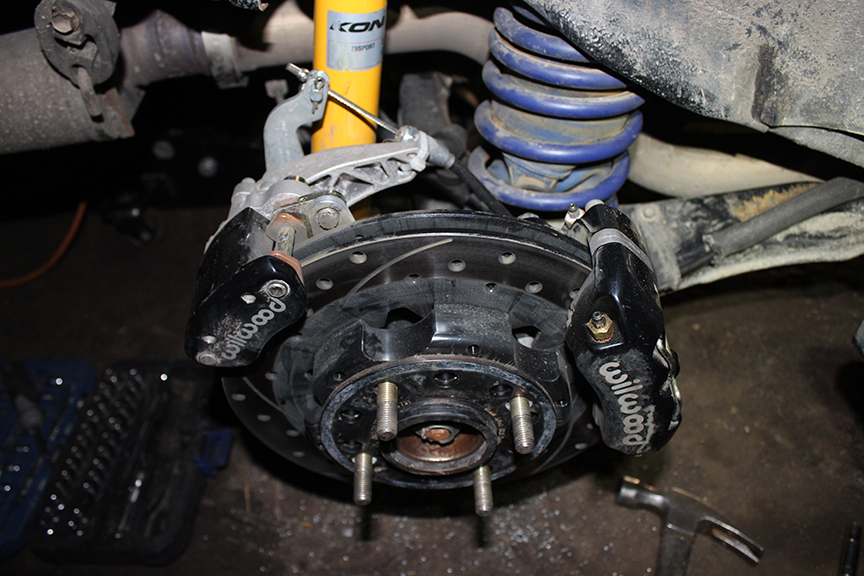 The right rear the emergency brake braket holder broke when I was trying to fit the Lokar fitting inside it. Fucking Lokar. I like Summit Racing but they never called me back to arrange for me to get the right parts. I simply modified and installed for right rear. This was another learning experience. Ideally the emergency bracket should be redesigned to fit on the inside and not between the caliper and the disc. I got them to work but the clearance was tight and it makes the install a lot harder since you have to take the caliper facing off to tighten bolt then install inner pad, rotor, outer pad, and then caliper facing.

The rear system is working pretty well and I believe the stopping distances are quite a bit shorter. It is a longer pedal feel. This next summer I will switch out the brake booster for a new one to see if that has any effect on the pedal distance. The cool thing is that it is a much more control lock up from 60 to 0. In fact there is a lot less lock up involved where there is more control in the pedal before lock up and even if I jam on the brake it slows down the speed of the vehicle more quickly before full lock up. I guess a better way of stating it is that it is harder to lock up the brakes yet the stopping distances are decreased. I will have to do some testing to see where I’m at.

-  Wed Jan 12, 2022 10:56 pm #12373
I also got my oil pressure sender working for my digital oil gauge. It has been on the fritz since day one. I ended up drilling the hole in the end from about 1/32″ to 1/16″. I also replaced the end cable which broke off when I unscrewed the lock down nut. I read reviews online that indicated they got it to work by drilling out the end hole. They drilled it out to ⅛″ which seemed rather drastic. So far so good. I’m getting the correct readings throughout warm up and entire operation range. Hopefully, now I don’t need to move the sender off the engine. Time will tell.

I never was able to get the wheels I wanted for winter tires only. Everything was out of stock. I’ll wait, and did get a 10% coupon. Now winter snow I think is done for the year here. Two weeks. I know some of you guys are dealing with months on end of freezing sub zero temperatures. I couldn’t do it. I do want to order up a street performance LSD which I think would be fun in the snow. Tied with that will be aluminum flywheel and a six puck clutch with a higher holding power. It is super irritating feathering the throttle through fourth and fifth. The Centerforce dual surface I thought was good up to 220 hp, but either I’m over that or it won’t hold that much.

I ordered up a rear top strut mount bar from Cusco which I found out is discontinued and then I order upon the UltraRacing one and it is backordered. I guess I should be content that I can continue ordering anything mid-pandemic.
Walt liked this

-  Thu Jan 13, 2022 9:45 pm #12378
Freaking hell. I had another close call today. The oil pressure sender that I took off last night busted off the last 5 miles of my commute home. It was the 90 degree aluminum fitting. I notice just before my exit that the oil pressure gauge dropped considerably. It worked all day long perfectly for once and then it dropped down to something like 25 psi. I thought it was just the sender again getting plugged. I took it easy the rest of the way home. I checked the oil first thing and nothing was showing on the dip stick. I had changed the oil last night and had topped it off to the line. I put a quart in with maybe just the end showing a smidge. I idled it down to the shop and got underneath it the pit and could instantly see the chaos of oil smear. I thought it was one of the oil hoses to the remote oil filter or oil cooler, but when I reached up and bumped the oil sender it just fell and was hanging from the wire. I had to take the hoses off and the oil block off plate where the fitting snap off inside the ⅛ npt port. I couldn’t get it with my easy out so I drilled it a little bit more and jumped up a size where it backed out without damaging the threads. Luckily I had the original ⅛″ npt port plug on hand to fill the port and got everything snugged back up. 2 ½ more quarts later she was topped off. Hard to say exactly how many quarts she lost before I got home. I’m sure I lost some after the idle down to the shop and probably ½ to ¾ of a quart when I pulled the hoses off. I hold about 4 ½ quarts with the oil cooler and hoses. I think I avoid all damage, but way to close.

i think the older parts are mostly distributors in[…]